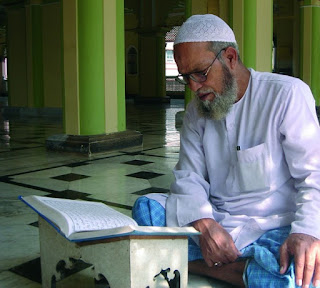 As one influential mission leader in our day has commented, “too many Christians are not even talking to Muslims!”  That is not the case with our worker Steven [name changed], who has labored for more than thirty years in a predominantly Muslim country. Steven is constantly looking for openings to speak with Muslim religious leaders. And he has had many opportunities to give a testimony in front of influential people. Some of these muftis and imams have established an association that seeks to build better understanding between the various religious groups within this particular the country.  They invited Steven to an inter-religious conference in the capital city, and invited another ReachAcross leader from Europe, David [again name changed], to attend with him. David’s description of his time at this convention (edited for this blog), shows us that the Holy Spirit can give us unexpected opportunities if we are open for them.

Initial Skepticism
Steven was skeptical at first, because such conferences usually don’t deal with the real issues, and resulting pronouncements often don’t lead to real action. Christians in the country encouraged him to attend, however, and he was able to invite other theologians to go with him—which was the reason that David was able to join him. The convention that resulted was held under the umbrella of the national Minister of Religion and attended by 200 delegates. Those who had organized the event—very professionally, as it turned out—seemed  positively impressed by the attention it received, as well as the large number of attendees.

Impressive Gesture
The national Christians were very appreciative of the fact that they had been recognized and invited to the event. Various denominations were represented, including a Catholic archbishop. It included a Jewish representative from Great Britain, who at the closing ceremony was invited to sit up on the stage with the Minister of Religion and other guests of honor. This was an important gesture—the organizers seemed to really desire to work toward achieving peaceful coexistence between the various religious groups. They were prepared to deal with public threats initiated by extremist groups. They wanted to initiate a process that would continue in various work groups and publications.

Addressing Discrimination
The program at the conference addressed important aspects related to coexistence and tolerance. Muslim leaders spoke openly about the situation of religious minorities in the country as unsatisfactory. Unfortunately the talks did not generally get down to the real challenges of local religious minorities. But it was an unusual opportunity to speak openly about such weighty matters before such a distinguished group. David was able to give examples out his experience regarding the peaceful existence of Christians and Muslims together in West Africa. Good responses followed.

Please Pray for Me!
But the best was yet to come: David had some really deep and worthwhile conversations with imam from the Middle East. This man heard for the very first time that there was such a thing as a Bible translated into Arabic!  Meetings with  hosts, local muftis and imams, were very warm and cordial, as they expressed a very heart-felt hospitality. One of the imams hugged David and Steven as they all parted company and asked them to pray for him. After a long conversation about very personal topics (such as faithfulness in love and marriage), a local journalist commented that he had harbored false ideas about Christians.

And so God opened the way to a completely unexpected opportunity to meet with influential Muslim leaders and tell them about Jesus!

Authored by a ReachAcross leader