Injured in the Line of Duty 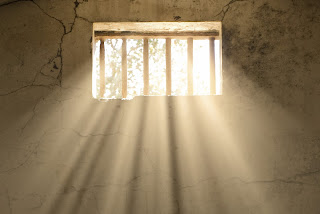 Interesting. I was just typing an e-mail to our prisoner in the Lord, Raymond. You know, the guy that Jesus found on death row many years ago. He was going to commit suicide back then, but instead of being dragged down to death by despair over his sins, he was transformed by Grace. Now he's gotten permission to visit some of the inmates in solitary confinement, one of them who has been there for seven years.


I guess it doesn't get much lower than that.

It reminded me of something else, but bear with me just a moment in order to establish the connection. In the last few weeks, I was privileged to visit a brother of a friend, a man dying of brain cancer. It all started because of a love God has given him and me of the original languages of the Bible. Decades ago during my seminary days, I had a very good Hebrew teacher who taught us particularly some of the Psalms, as well as Isaiah 52:13-53:12. So I made it a life-long project to memorize Isaiah 53, among other passages, in the prophet's language. It has taken me most of my life, and probably will continue to do so, since I'm still trying not to forget what I've learned!


Anyway, the first time I went over to John's (not his real name) house, we looked at Isaiah 53 together. Then he said after a couple of hours together that he'd like to look at Habakkuk. Wow, that took some work, but it was good stuff. How could God allow evil like that, Habakkuk asked?


Next time, we started Jonah, because John knew the text of Jonah well. He pointed out to me that the word 'ra', or 'evil', is used for violence in Jonah (not the usual Hebrew word for violence, by the way, but I can't use the usual word here, since it might cause undue difficulty--it appears in other, modern languages, too). Violent Nineveh (1:2); violent storm (1:7); finally, in 4:1, 'violent, evil, Jonah'. In essence, God says that Jonah's nationalistic, favoristic attitude towards Israel and against those sinners of Nineveh was from the pit (not in line with John 3:16, for example).

We studied on, pretty much got through the whole first chapter in our three hours together. But I realized I was going to really have to put myself into it and make sure I had all the verbs analyzed well in advance, so I put extra time into the text of chapter 2.


We never got there. The day came I was supposed to go over, and John's brother called me: 'He would like to see you, but can only talk for a few minutes.' John was fast losing strength. So we could only talk about one verb in Jonah 2, which is translated 'surrounded', 'enveloped', and usually in a negative sense. The waters surrounded him and the fish was dragging Jonah down, pulling him into the pit of death. But there was a greater power surrounding him, the chesed, covenant love of God, and he got tossed up on to the shore of Greater Service.


Only a few days later, John got tossed up on to the Eternal Shore where Jesus was waiting for him. 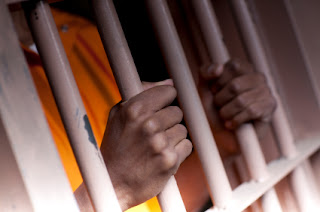 Now back to Raymond. He's been lifted up to greater service, too. Just not the Final one, just yet. Thankfully, because we need him (check out Philippians 1:23-24!).  I was in the process of sending him a small Christmas present over the Internet. Something to help him get a few cups of coffee with cream and sugar. (Prisoners don't get coffee with cream and sugar, it seems. They usually only have five minutes at chow time, anyway. It's a 'get in there and out, now!' sort of atmosphere. Coffee, if it is there, is black only.)


Raymond doesn't have much family left, and basically nothing in terms of personal possessions or income. Not like some prisoners who seem to be able to buy whole bunch of cigarettes for $10 apiece--not that Raymond is interested the least bit in tobacco.


I just wanted him to enjoy a few cups of coffee with sugar, and to know that we think of him; he's like family. A brother. Like John was.


Anyway, I was thinking of Raymond, descending down into the pit of one of the worst prisons in his state, trying to reach out to the worst of humanity (you can only talk to prisoners in solitary through a hole in the door, and you never know if you're get a razor blade or human excrement tossed at you).

I was interrupted by a  phone call from someone raising money for local law enforcement hurt in the line of duty.


A worthy cause. But I explained to the caller that I was just about to send a gift to one of those prisoners that everybody hates, because they are evil, and the cause of all the grief to law enforcement in the first place. My point was that law enforcement is good, but Transformation through Christ is better. 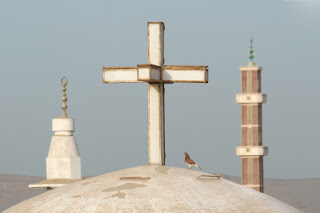 The caller listened without saying a word while I gave him a 2-minute Gospel presentation about the Christ of Isaiah 53, who died for evil people like me. And him. And Raymond. He thanked me politely, and hung up. 'Maybe next year,' he said.


And wouldn't you know it, just as I hung up the phone, on came the aria from Handel's Messiah, 'I know that My Redeemer Liveth.'  The One Who pulls up from the Pit of Despair and sets us on the shore to New Service. The One who surrounded us the whole time we were in the Pit in the first place. The One who was truly 'injured in the line of duty.'


'Behold your God!' Indeed. Not the remote God of Islam, but the One who, through Death, lifts us up into Life and Service.


John is home. Raymond, not yet. Me neither. Evidently we still have jobs to do.


But I'm so glad to be the brother of both of these.